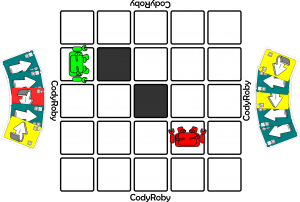 The Duel is a CodyRoby card game for two players or teams. The two players (or teams) use the Cody cards to move their robots on a 5×5 chessboard in the attempt of catching each other.

All you need is included in the starter kit.

The two teams place their pieces on two squares at the opposite corners of the a board. In addition, each team places a block on the board in order to make a square impassable. The 40 cody-cards are shuffled and packed in a deck placed on the table, or on the floor, face down.

Now the duel can start.

At each turn a team takes 5 cards from the top of the deck keeping them hidden to the other team. If the team has some cards in hand from the last turn, then it takes from the deck only the cards necessary to have 5. The team evaluates the 5 cards in hand and use one or more of them to move its Roby on the board. Moves are made by revealing and dropping one card at the time. The team can decide how many cards to drop in each turn, but it has to drop at least one.

The winner is the team which moves its Roby into a square already occupied by the other team’s piece.

There are two exceptions to be regulated: