Cody & Roby is the name of a new series of DIY games that provide the easiest way to start playing with coding and robotics at any age, without computers, tablets or smartphones. Download your DIY starter kit!

Roby is a robot who executes instructions, Cody is a coder who provides instructions. At the beginning there are only three instructions: move forward, turn left, and turn right. Each instruction is represented by an arrow drawn on a card. During a game Cody selects a card and passes it to Roby, who moves on a chessboard accordingly.  No equipment is required. Roby and Cody are just characters played by the players of the game.

You can draw your own cody cards or print the ones provided below. The number of cards required and the size of the board depend on the specific game you are going to play. The official cody cards are available in color (CodyRoby-col) or black and white (CodyRoby-bw) to be possibly coloured and personalized. You can print cards of any size, depending on your needs and on the target players. I suggest to place up to 9 cards in each A4/B1 page to save paper, and to use a paper thick enough to avoid transparency (which could impair some of the games).

For playing on a table, the board can be simply drawn on a graph paper. If you prefer to print it out, here is a 5×5 board that can be used for most of the games. 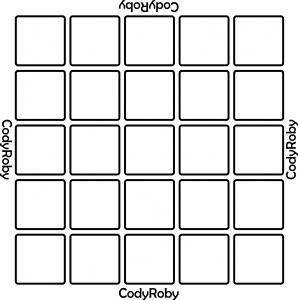 When the games are played on the floor, team members can play the role of Roby and move on the board. Hence, no pieces are required. When the game is played on a small board, each team can use its preferred piece to represent Roby, or otherwise the official Roby drawings can be used as pieces. To this purpose, the following drawings can be printed and cut out. The black and white piece can be coloured and personalized as you like.

Surprisingly, with the first three cody cards it is possible to play with friends in many different ways, having fun while learning to code.

You can invent your own games, or play the ones proposed in this site. If you invent a game that you are very proud, tell me and I’ll publish it in your name.